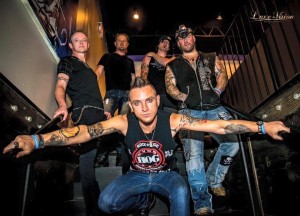 Scott Wilson former Bassist of Tantric, Florida Georgia Line, songwriter, and producer has made the move to Saving Abel.  He is replacing the 10-year veteran bassist, Eric Taylor (ET). Wilson has had a working friendship with Saving Abel for a number of years and plans for a new record with the band are currently in the works. The band is on tour until October 2017, while they lay down tracks in their traveling studio. Saving Able will be formally piecing the record together at Sunshine Studios Live, in Colorado Springs, this November and December. Plans to release the cd are expected for early next year.

About 2 months ago, Wilson was approached by Saving Abel to lend a creative hand in the production of a new record. This was also around the time when Eric Taylor (former bassist for SA) decided to start transitioning out of the music industry and into a relaxing retirement. About a year and a half ago, Wilson made a declaration with a timeframe.

Why Did Scott Wilson leave Tantric? That’s a question with a bit of burning controversy. So, we decided to ask Scott and get to the bottom of why he left his 7-year career with Tantric.

“… If Tantric isn’t on to track make moves business wise, really push for a new record, a new single, that makes a difference in the music industry, then I need to start thinking about doing something different.”

Wilson chuckles about his new endeavors with Saving Abel and what he looks forward to the most about the tour.

“… We are a family and we were before I was in the band. They are some super great dudes. The great part about Saving Abel is their fans. They are so diehard and really dedicated to the Saving Able Brand and the fans really hold on to the individuals in the band.”

Wilson is passionate about his fans and looks forward to getting out to meet new people. He appreciates hearing their stories about how his music and his personal story has affected their lives, and cultivating new friendships. He is excited to be officially part of Saving Abel and watching the band that is already so strong, keep growing.

Wilson’s common concern through the interview was that of “what about the fans? What about the music?”.  This was also the source for his excitement. Scott Wilson is what makes music great. He treats the music industry with respect and commands quality standards for his fans and community. Scott is an exceptional bassist in the rock music industry and has chosen to stay connected to the source of his inspiration. He continues his many side projects with dedication and enthusiasm. Bass Bomb clothing and accessories will still be for sale at the shows and a portion of the proceeds go to various charities. Sunshine Studios Live is stronger than ever, and continues to be a meeting place and creative playground for Scott and Saving Abel. He also has managed to stay close friends with Brian Bonds (formally of Tantric).

So in our opinion… what’s happened to Hugo and Tantric, now that drummer Mike Smith, basest Scott Wilson, and guitarist Brian Bonds have left? Well, that’s a sad tale.
The long awaited Tantric record that should have been released over a year ago may go unheard for a bit longer. Hugo has had to form a completely new band lineup and scrape to keep his brand alive once again. Scott Wilson has had to pick up the microphone on more than one occasion for Tantric fans. The former band members have had to pull together to fill in for Hugo’s strange and disheartening behavior. The talented Ty Fury, guitarist for Trapt, has announced that he will be working with Tantric.

Stone Age Rock Report would like to thank Scott Wilson and Integrity Music Management. We wish ‘ya all the best in your new adventures Scott!